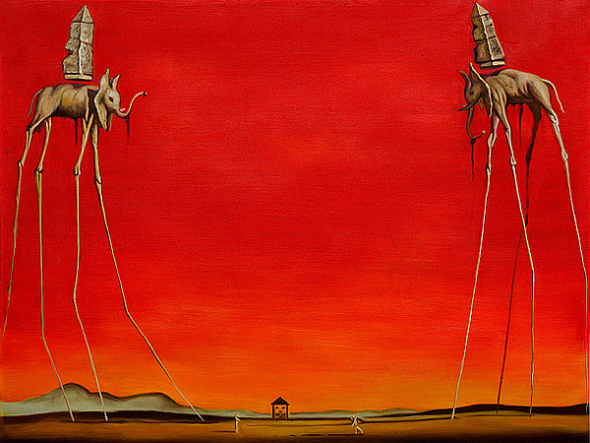 As the painting of Catalan artist Salvador Dalí, separatist leaders and central Government seem to be making big decisions, however supported by very thin legs within a political desert (also at European and global level). The road ahead is full of danger, risk and uncertainty without solid pillars that sustain them, although the vision from the top seems promising and ambitious. Is it quite obvious that both sides are not seeing the reality with vision and sense of integration. Instead a dramatic stage is leading its decisions, from the Central government threats, violence, a steady “no” to negotiate -even to dialogue- in addition to the use of paternalist vocabulary to refer to separatist´s leaders. From the latest an unclear view about what an independence process suppose and its impact –particularly for the financial market-.

In cultural terms Spain is a country that carries on with the heavy burden of a civil war, which deep differences remains to this day. Indeed, a country with two –or more- philosophical visions of the same society transforms the citizenship in extreme and with opposite and irreconcilable positions. Is easy to see reminiscences of Franco era in many villages and also on the political positions of Spanish people. The recent act of violence from the government in Catalonia exposure once again that reminds the spirit of a dictatorship and the conviction that without dialogue Catalonia´ citizens must move towards “Union”. The President M. Rajoy insists in that position: “the Union of Spain is not a matter of negotiation”. A position that he also held during the time that there were not government and in which period there were unable to form a coalition.

A political attitude in which the verticality its the only answer instead of the democratic horizontality of dialogue and negotiation.

Thousands of times during this controversial process we have heard from the Central Government that “this Referendum is illegal” which is true according to the Constitution. However the following statement is not: “this Referendum goes against democracy”.

Democracy is the “power of the people” by definition and a Referendum it´s maximum expression. How do we do with an illegal demand from pacific voters within a democratic system? Definitely a change is an imperative. Law is not only a framework for Rule of Law but also the body that represents the needs of their citizens. Is precisely the change of traditions and circumstances that make the law adapt accordingly to its evolution. Which lead us to the conclusion that if there is a majority of Catalan citizens claiming for a separation, Negotiation is the way out to finally changing the law, in this case the Constitution to adapt to the new needs of those people. Culture is another element to take it into account and supposes a good reason for revising the entire system. If the law does not reflect the changes that a society experiments it becomes obsolete and creates fear and permanent discontent. In addition if those initiatives are fighting by violence against pacific people it generates more anger and more rejection. Its important to see the emotional context of Catalonian people that in less than two months were submitting to external and internal violence. If external violence were difficult to foresee, internal violence is definitely avoidable and shouldn’t be a resource for a democratic issue, as in this case.

It’s a fact; send riot police is not the answer for what the Central government defined as an illegal referendum. First of all is a political issue that goes beyond legal aspects. The decision to call security forces confirms it. If not, if there is just a matter of strict legality the process would be completely different and the referendum pacifically performed would be submitted to just cancellation of its results with no mayor consequences. The use of the force shows the fear of a government unable to stop a democratic process that is demanding changes from the Central Government and exposure its weakness.

In this case both parties, Ciudadanos and PP are showing reminiscences of a past dictatorship that instead of using resources as Negotiation and Diplomacy they are trying to resolve political differences through pressure and intimidation.

In addition and despite wrong assumptions from Rajoy there is no support from the international community and/or European leaders of this process. In fact leaders as Guy Verhofstadt, Charles Michel or Jeremy Corbyn are clearly exposure their condemn towards the use of violence for resolving a legality controversy.

If there were any hesitation about an Independence´s, after the violence now it make it clear: Catalonia´ leaders have enough reasons to disagree deeply on methods and philosophy even if the price they have to pay is to be out to a Nation that historically has belonged.

Is it also true that without an alternative model, Catalonia will just go through good intention, euphoria and a feeling of “being out of the threat” that definitely will not driven them towards a sustainable freedom, as there are aiming to.

Nothing different from Brexit, although without the xenophobe and racist element, but the same mood in which feelings more than alternative models dominated the stage. A decision of this kind needs carefully calculated, however it doesn’t seem the case and defensive –maybe logical—reactions are leading a process without measuring the consequences. Its already happening and financial entities as Sabadell or Caixa are moving headquarters –also fiscal residence- from Catalonia under a new regulation that the Government approved to facilitate its movement.

If the idea of Catalan´s leaders was to deliver a safety framework for their people, there are failing and uncertainty will further more fear.

What is driving the Spanish Government to use violence, to feel fear to the point to have violence as the only resource; to send riot police to a democratic event with pacific voters?

One of the argumentations is that is a “bad precedent” for national and European Union. However, with a smart alternative model that delivers financial-political safety through a good deal and a fair negotiation process with the Central Government, there is nothing to be worry about it, is it just another Nation under new rules and integration means.

The real element to be worry about is if this initiative does not come from Catalonian ‘citizens but by other interests, as in Brexit, in which a racist, xenophobe agenda was the real goal for an isolationist project that has not measured the consequences and goes ahead without an alternative and tangible model/agenda.

The voices of thousands of citizens need to be heard even if there is a minority. In a Democracy there should be mechanisms to that not only listen to those demands -if they do not go against human rights- but also deliver solutions for them. Is it true that in the end the power of the majority decides their destinies but never without been heard before. By sure, violence must never being part of it…

Expressions as: “irresponsible”, “scared”, “ lost minds”, “madness”, “out of reality”, “forgetting your duties”, etc. were the kind of vocabulary used by representatives of the Central Government. A paternalist language that does not match on a political debate and is destroying any channel for dialogue, -in fact denied the need for Negotiation-. This is a deep political mistake that goes further than just a wrong strategy to resolve a national crisis. No dialogue or negotiation could ever be the answer in a democracy for citizenship´s demands, even if the referendum in itself is not legally conceived for current legal framework. A minority claiming for changes is just a sign that the system needs to be changed and citizens must have a way-out for their demands.

A referendum that is not contemplated by the Constitution doesn’t mean an anti-democratic process and/or a no legitimate demand. It represents a cultural change in the society that is pushing for changes (within Spain or not). Even if there is not clarity of the opportunity for this demand it marks a new era for the Central government and an urgent need for a Constitutional change after a process of foreign Mediation.

The failure to achieve results from the Central government has generated distrust and confrontation.

MEDIATION from the European Union is that elephant with gross legs that may change and settle Catalonia-Central Government interests within a meadow of opportunities in which minorities are attend on their demands. Democracy.

2 thoughts on “Catalonia/Spain: the dangerous road towards authoritarianism”