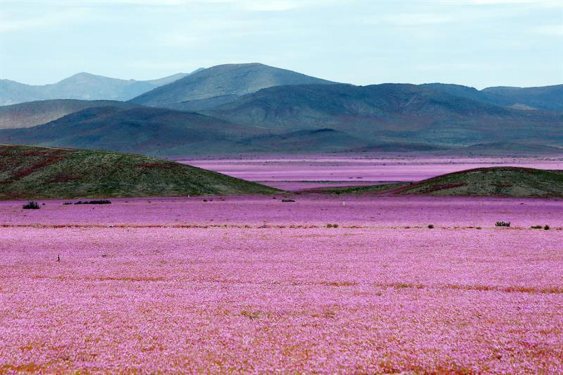 What could be more weird and beautiful than a desert full of colourful flowers? The “flowering desert” of Atacama (Chile) gives precisely that landscape during September and November, when a wide range of flowers blossom after an unusual heavy rainfall. This phenomenon makes me reflect on the need to change our own preconceptions of “ be” or “should be”, difficult challenge that drive decision makers to be creative and build proposals from an innovative and revolutionary perspective.

Currently, the world we live in it’s shaped by uncertainties for the future and on going in-depth changes. This framework forces to integrate adaptation measures to political and economic agenda as a priority.

It´s expected that in 15 years they´ll be 100 millions more of people living in poverty. This striking and disappointed forecast lives Millennium Goals in a very weak position and is a drastically indicator that other reforms must be done to be prepared to achieve those goals. Is in the context of that reforms that we identify three main factors that determines the challenge of building resilient societies:

1.- A change of global values is needed and means a structural cultural global reform. Is it here when global leaders acquired a relevant importance to design an agenda on education and give proposals for improving the integration of global values.

2.-The role of education in this process becomes one key element to refocus economic-political policies towards a goal of resilience. The more educated we are, the more prepared we´ll be to search for innovative solutions that face adaptation challenges with strength and determination.

Instead of seeing crisis or natural catastrophes as an “end” its necessary to re-educate towards a proactive perspective in which we see it as a “beginning” of something new, that press for structural changes.

3.- A change of mind that lead us to erase all what was considered certain, safe and predictable and jump into the abysm of a new reality: uncertain, unsafe and unpredictable. This individual change of mind could be achieved through the active and continuous activism from leaders and civil society.

One of the big values that are imperative to change is to give much importance to GDP growth instead of growing by the implementation of innovative & adaptive strategies. Innovate shouldn´t be the same as in the past, but guided by a vision of a new world in which humans are agents of change but aware that the leading role is holding by the unknown. This is one of the great steps to be creative: the infinite capacity of getting surprised and be prepared to create new frameworks of resilience.

Promoting change and innovation by investment on infrastructure, I+D, research, work with local communities, flexible fiscal policies or diversification production are some of the urgent measures needed to get to a serious adaptation and resilient strategy.

The original focus of investment on I+D mainly on raising levels of GDP growth are challenging by new parameters that require to divert this focus to a coherent and visionary adaptation strategy. More than ever we need to maximize creativity towards better and more ideas on adaptation measures. Being aware that what was considered “impossible” in the past, is a possible and threaten reality that leave the world in an extreme vulnerable position.

Invest on uncertainty is the most certain way to struggle against climate change impacts.[1]

Let´s accept it, is non-marketable for governments to invest on an uncertain basis, particularly after the recent recovery from global financial crisis but, is a matter of responsibility, not just for their own countries but also in a global context. The role of developed countries (that represents less that 20% of the total population and raise almost 70% of green house emissions of the entire planet) become very important as leaders of change and drivers of climate resilient planning able to help developing countries and themselves to boost capacities and resources.

I+D gives way to I+A for a resilient world based on creativity and innovation at the service of adaptation measures.

Creativity is a strong driver of change and for current uncertain times it becomes paramount. The fascinating mystery of taking challenges and entering into the uneasy dimension of the unknown by searching for new economic models based in behavior and motivation that helps on the road to an effective strategy on innovation and adaptation.

An humanist approach is strongly needed to make it happen a “Mass flourishing” that Nobel Laureate E. Phelps refer to and gives the basis to get out of this “desert” of uncertainty and constant change that would lead the world into devastation and poverty if there is not an effective, urgent and dynamic plan of action towards INNOVATION + ADAPTATION.

Global leaders: is your term for leading in changing minds and reshape new codes of cultural and economic behavior.